In the year 1967 a man by the name of Zino Davidoff, the owner/founder of the company under the same name, and by trying to educate his mass audience, published an essay named Zino Davidoff’s Guide to Cigar Etiquette. One of the first of its kind, this well-regarded primer still appears true today. 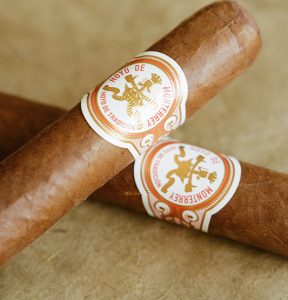 Warm the foot of the cigar slightly before starting to puff on it. This doesn’t necessarily mean toasting it under a flame, but can simply involve rolling it gently in your fingers.

Remove the band carefully after lighting the cigar. It should only take a minute for the gum on the cigar band to be sufficiently warm to remove the band with ease. When smoking with a group of friends, my first inclination is to recommend this.

Take your time smoking your cigar, a puff a minute is good. Smoking a cigar is an experience, not a chore. There is no need to wildly puff your cigar.

Allow the cigar to die an honorable death; after it’s smoked halfway, it will go out on its own. Today most men will continue to smoke it until there is about 1/4 left. A cigar is not meant to be smoked down to the foot.

Dispose of a dead cigar discreetly and fast. Just as a cigarette butt is one of the most distasteful sights one can see, there is truly no reason to keep a cigar once it’s extinguished.

Wait at least 15 minutes between cigars as anything less indicates obsessive behavior.  As I’ve said before, cigar smoking is a passion and with such a diverse flavor profile available, there is no the reason a cigar cannot be paired beautifully with each meal, a dessert or even an after-dinner drink.

Use a penknife to cut or pierce the end of the cigar. This comes down to class. It just looks bad and there’s no reason to do it.

Touch the flame directly to the foot of the cigar, simply rotate it around the edge instead, until it begins to burn, and then puff on it lightly. The goal isn’t to light the cigar on fire. It’s to toast it just enough.

Lighting a cigar should be a personal experience; never ask someone else for a light. This doesn’t mean you can’t borrow a friend's lighter or matches. It simply means that you should undertake the responsibility of lighting the cigar yourself.

Light your cigar too slowly or too quickly. Again, this is an experience. Take time to enjoy the lighting process but don’t stall or pause throughout the process. It should be a continual toast.

Indulge in exhibitionism, whether you are lighting or smoking your cigar. This is one of the most personal and gratifying experiences that one can have. This is your moment in the day to relish in the tranquility of the cigar.

Relight your cigar if less than one-quarter of it is leaf. This really comes down to the quality of the smoke. If your cigar keeps going out then chances are you should leave it out. Continually relighting it only strengthens its harshness.

Clench your cigar between your teeth. Unless your goal is to replicate the brute actions of Tony Montana from Scarface, this is not a behavior a gentleman should exhibit. Smoking a cigar should be an elegant display, not brash or unsophisticated. And for the love of God, please never talk with the cigar in your mouth.

Wet the end of your cigar. Don’t chew it, or slobber on it either. You’re not a dog and the cigar is not your bone. There is no need to wet the cigar unless it’s burning unevenly and if that’s the case, you can simply moisten your fingertip and then dab the area to slow the burn.

Smoke too quickly. This isn’t a sprint or a race, it’s a casual stroll through the park. Enjoy it. There’s no rush and if there is then you shouldn’t be smoking a cigar in the first place.

Ever use a cigar holder. This isn’t a cigarette and you’re not Cruella DeVille. Smoking a cigar is about relying on all of your senses, including touch. You want to feel the cigar in your hand.

Stick a toothpick or matchstick at the end of the cigar to help hold it in your mouth. A cigar isn’t meant to stay in your mouth. Hold it between your fingers at all times. Even when you’re taking a draw.

Dip your cigar in port or brandy. This is a habit attributed to Winston Churchill but you good sir are not Winston Churchill. Just because he made this faux pas doesn’t mean you should too.

Smoke whilst working. Work is stressful and while a cigar can be stress-relieving, it’s intended to be enjoyed in a relaxed state of mind. Despite how difficult your day at the office was, wait until you get home, pour yourself a drink and sit back to enjoy your cigar.

For more Cigar Etiquette, visit the link below

(As appearing in the GENTLEMAN'S GAZETTE)